Award for fastest growing MSBs in Bavaria: Einhell is one of “Bavaria’s Best 50”

Einhell Germany AG ranks among the fastest growing medium-sized businesses (MSBs) in Bavaria. The leading company for tools and gardening equipment received the award at “Bavaria’s Best 50” prize-giving event. Hubert Aiwanger, Deputy Minister President of Bavaria and the Bavarian Minister of Economic Affairs, presented the award in person on 26 July 2022 at Schleissheim Palace. 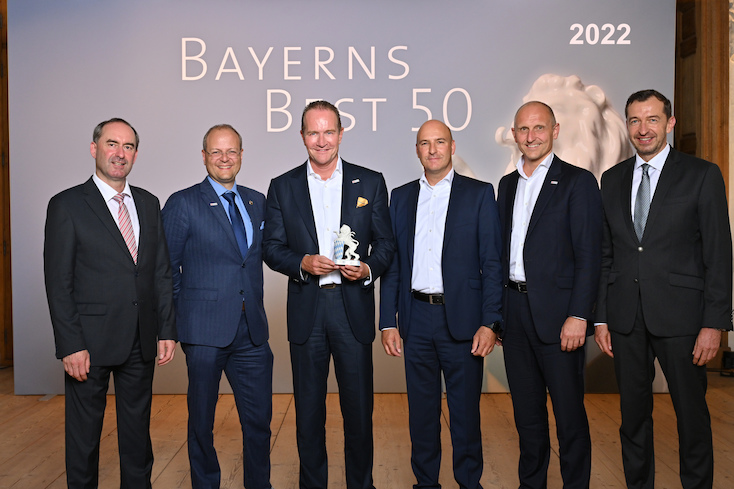 Einhell stands out with its above-average growth

Einhell, the Bavarian manufacturer of tools and garden equipment, has received the “Bavaria’s Best 50” award for the second time in recognition of it being among the 50 strongest growing medium-sized companies in Bavaria. The coveted prize has been awarded since 2002 to Bavaria-based medium-size businesses for their outstanding performance. This year’s prize-winners were selected on the basis of objective criteria by Mazars GmbH & Co. KG (chartered accountants and tax consultants) acting as an independent adjudicator.

The Bavarian Minister of Economic Affairs Hubert Aiwanger acknowledged the company’s achievements and handed over the coveted white “Bavarian Lion of Growth” to Andreas Kroiss, Chairman of the Management Board of Einhell Germany AG.

“It fills us with pride to be one of this year’s 50 strongest growing Bavarian businesses,” said Einhell CEO Andreas Kroiss upon receiving the Bavarian Lion of Growth. “This award is above all a token of appreciation for the more than 2,000 employees in Einhell’s workforce. The pillars underlying our success are built on their expertise, dedication and strong team spirit. For us the award is both a source of great delight and an incentive to keep giving our best so that we continue belonging to the best.”

In the past few years Einhell Germany AG has achieved above-average growth in both sales and earnings, clearly exceeding the figures reached in previous years. Consolidated sales in 2021 went up by 28 percent to EUR 927 million. Earnings before tax rose by 45 percent.

The strongest basis for the enduring business success is the Power X-Change rechargeable battery platform, with which Einhell offers the most efficient battery system for DIYers and amateur gardeners on the market.

The company’s sustained growth continues to be reflected in its strong performance in DIY stores and in e-commerce channels. Other contributors to the brand’s growth are Einhell’s strategic marketing activities such as its partnership with Bayern Munich football club and its international TV campaign.

Bayern’s Best 50 – the competition for MSBs

“Bayern’s Best 50” is a prize awarded to medium-sized businesses which have a proven record of extra strong growth and have managed to increase both their workforce and sales by an above-average amount. These businesses live entrepreneurship, they take responsibility and they create the jobs which form the basis for Bavaria’s high standard of living. The Bavarian Ministry for Economic Affairs, Regional Development and Energy rewards these efforts by listing the 50 strongest growing medium-sized companies in its “Bavaria’s Best 50” awards.